In the brain, nerve cells maintain interaction with other neurons through the expression of certain proteins on their membranes. However, surface proteins that stay on the membrane for too long can disrupt the connections between synapses. 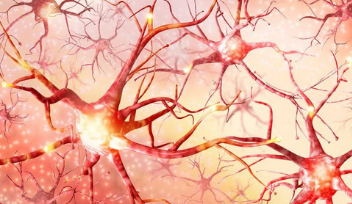 Credit: A 3D illustration of pulses of neurons in the brain. (Romanova Natali / Shutterstock)

As reported in the Proceedings of the National Academy of Sciences, Mary Hatten and colleague Hourinaz Behesti have shown that a protein called ASTN2 is involved in moving proteins away from the neuronal membrane in a timely manner. They also suggest that mutations in ASTN2 may lead to neurodevelopmental disorders. Hetten had previously shown that ASTN2 serves as “trafficker” that moves receptors along during cell migration in early development.

The researchers report that increasing ASTN2 expression in the neurons, led to a decrease in the level of binding partners, indicating that ASTN2 binds to these proteins and then moves them from the membrane so they can be degraded inside the cell. They also showed that neurons with increased ASTN2 produced stronger synapses and they suspect that lower levels of the protein may result in the formation of weaker synapses.

The team suggests that insufficient ASTN2 causes proteins to gather on the cell surface and disrupt connections and communication between neurons. "Synapses aren't static. They need to respond in real time to dynamic stimuli; and one of the ways they do this is by changing their surface protein expression. Our data suggest that people who have mutations in ASTN2 make less of the protein, which leads to slower or weaker synapses," says Behesti

The study supports other research suggesting that disrupted expression of neuronal proteins may be at the root of neurodevelopmental disorders such as learning disabilities and autism. It also suggests that the cerebellum may be worth studying further to understand such conditions. "People are just beginning to realize that the cerebellum isn't just there to control movement and motor learning. It has much more complex roles in cognition and language,"  says Hatten.