New research from USC has uncovered a previously unknown genetic risk factor for Alzheimer's disease and related dementias. The study provides insights on how these conditions, and other diseases of aging, might one day be treated and prevented. The research from the Cohen Lab at the USC Leonard Davis School of Gerontology sheds new light on the protective role of a naturally occurring mitochondrial peptide, known as humanin. 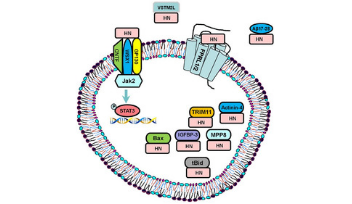 Amounts of the peptide decrease with age, leading researchers to believe that humanin levels play an important function in the aging process and the onset of diseases linked to older age. Because of the beneficial effects of humanin, a decrease in circulating levels could lead to an increase in several different diseases of aging, particularly in dementia," said senior author Pinchas Cohen, dean of the USC Leonard Davis School and one of three researchers to independently discover the existence of humanin 15 years ago.

The study, led by Kelvin Yen of the USC Leonard Davis School, appears online on Sept. 21 in the Nature­ published journal Scientific Reports. Among the findings, the researchers discovered a significant difference between the circulating levels of humanin in African­Americans, who are more impacted by Alzheimer's disease and other diseases of aging, as compared to Caucasians. ""We have now discovered a novel underlying biological factor that may be contributing to this health disparity," said Yen, a research assistant professor of gerontology.

The team subsequently examined the effect of this SNP in a separate large cohort of participants from the Health and Retirement Study, a longitudinal study of approximately 20,000 individuals over the age of 50 in the United States, of which more than 12,500 individuals consented to DNA analysis. Using this data set, the researchers report finding that the unfavorable version of this SNP, associated with low levels of the humanin peptide, is also associated with accelerated cognitive aging, providing the first demonstration linking a humanin SNP in the mitochondria to cognitive decline in people. The paper also shows that in mice, injections of humanin delay cognitive decline associated with aging, proposing a possible therapeutic role for humanin ­related drugs. The mechanism through which humanin acts to mediate these effects involves suppression of inflammation systemically as well as specifically in the brain.